After some 60 years, the entire natural stone façade of the administration building, built in 1960, needed replacing. The task facing schneider+schumacher was to renew this 2,200 square-metre façade with its – then typical – pivot-hinged windows in line with heritage listed building stipulations. In addition, current energy and construction requirements had to be met while preserving the original appearance of the building.

A considerable amount of planning effort went into finding the appropriate contemporary materials and details for the refurbishment work. While the original quarry could still be located, it could no longer be used since it has been restored to nature and has become part of a nature reserve. However, using an extended team of specialists it was finally possible to find a stone that was very similar to that of the original cladding. These greyish-brown slabs consist of Kelheim Auerkalk, in which rock elements such as corals and sponges are visible, giving the façade its typical appearance.

The same procedure was followed for the windows, which were all replaced: the original steel-framed, pivoting windows were still in place, but could not be adequately refurbished, largely due to the need for very high level of acoustic protection towards the busy Lauterstraße. Exhaustive work coordinating the details finally led to the desired result, which combines current stipulations for modern office buildings with all the constraints that apply to heritage listed buildings.

The individual slabs, each weighing up to a hundredweight, were manufactured and fitted on site with millimetre precision. This was achieved by creating computer scans of the original façade. On the basis of these scans, each new slab was then measured precisely and cut to size at the quarry. The new curtain-type, rear-ventilated façade now ensures a balanced climate in the district offices.

In cooperation with osd, GmbH & Co and ASPLAN Architekten 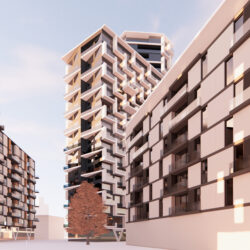 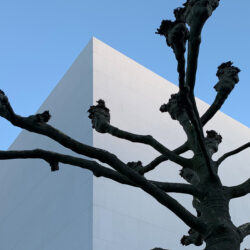 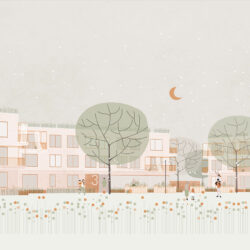