In March 1944, bombing raids and the subsequent fires destroyed Frankfurt’s old town, decimating what had been one of the largest intact city centres in Germany. The winding alleys and picturesque half-timbered buildings that once occupied the area between the Römer Square and St. Bartholomäus Cathedral were replaced by post-war reconstruction, with an awkward attempt at combining building styles – on one hand modern, on the other a partial imitative reconstruction of what had been lost – brought about by traditionalists battling the proponents of modernism.

But now the heart of Frankfurt – on a site located between the Cathedral and the Römer Square previously occupied by the city planning offices – is in the process of being fundamentally restructured. With the demolition of the city planning offices, post-war modernism has now given way to small-scale urban fabric, based on historical precedent. A “new old town” image is embodied in 15 elaborately reconstructed buildings, plus 20 new structures, each erected over the pre-war footprint of the buildings that used to occupied the site. The entire area encompasses 7,000 m2, and today, 200 residents occupy 80 apartments, and some 30 businesses set up restaurants and shops in commercial premises at street level.

Following the success of the master plan, DomRömer GmbH appointed schneider+schumacher in 2012 as project architects with responsibility for coordinating overall planning. The first section of the refurbished underground car park was re-opened in July 2013 and a new staircase access to the subway station was operational by February 2014. The building permit for the entire project was granted in July 2014, so that the construction work began in late 2014. The opening Party for the DomRömer quarter was held in 2018. 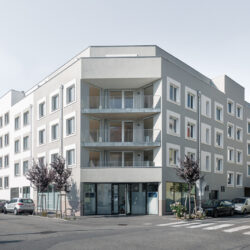 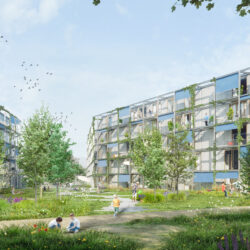 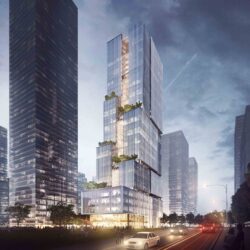